According to the LJ news, http://www.putin2012.ru/ became the main entertainment web-site.

Even the headline is awesome! 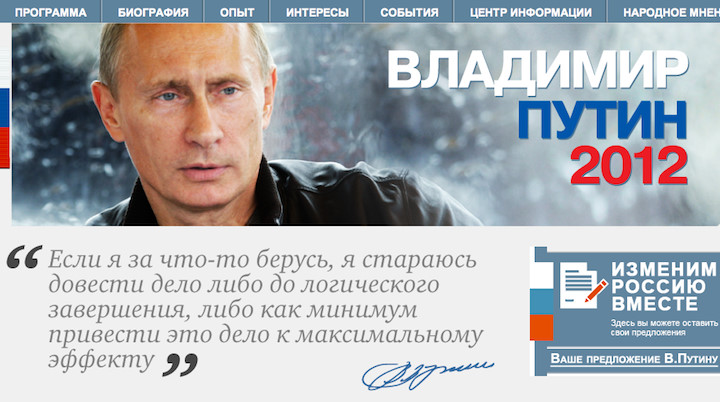 ("If I start something, I do my best to bring it to its logical conclusion, or at least get the maximum effect from it".)

This is definitely about the Gunvor and Ozero co-operative society (http://compromat.ru/page_9538.htm).
There is a "maximum effect" at least: Timchenko and Co sucked up our oil and became billionaires; the money kept in Switzerland. Ozero's neighbours are already billionaires and they created the country's new feudal elite.

The "logical conclusion" will most probably happen when they steal the rest of oil and use the money to build a palace the size of the Krasnodar Territory.

And something interesting was noted by

oleg_kozyrev - there's no mention at all of United Russia Party on Putin's website.
This is indecent. He gathered all these crooks from around the country, declared them the governing party, but now he says, "I'm not like them".

And of course the job done with "offers from workers" is just great!

If you think that after winning court cases against Transneft that we obtained the full provision of documents, then you definitely underestimate the persistence of Transneft's crooks or overestimate our judicial system's efficiency.

On Feb 17, 2001, Moscow Arbitration ordered Transneft to disclose copies of the minutes of the Board of Directors' meetings.

The Transneft crooks unsuccessfully tried to have this decision revoked with an appeal and cassation, but were finally forced to comply with it, so we received three boxes of protocols.

On August 25, 2001 bailiff decided to end the enforcement proceedings in relation to the actual fulfillment of the executive document.

As we can see from the executive list, they had to give us all of the reports without any exceptions.
The cover letter says that they had sent us all of the written documentation.

However, when we started to investigate these boxes, we found that the Transneft crooks were trying to cheat me, the Court, and the Bailiffs Service.
Only 10 records of proceedings were supplied in their entirety. And only extracts from the remaining 14 records have been supplied. This violates the Court's decision and means that they have something to hide.

I.e. we have only part of the information regarding 14 BoD meetings. For example, "Point #3 on the agenda" etc.
It's unclear what kind of secrets are hidden in the rest of the documentation.

"Having heard the report of the Transneft Director, Tokarev, the BoD decided to agree on the theft of the next $3 billion and on transferring it to Swiss bank accounts.
Then going to the "Miscellaneous" part of the agenda, considered continuing the tradition of eating children at the company's corporate events."

I'm not allowed to expose in detail the documents I received and those I didn't. They are waiting for me to do so, and if it happens they will scream: He's an unscrupulous shareholder! He divulged confidential information!

Of course we told the bailiffs about this situation, and appealed the termination of enforcement proceedings, yet we were refused by Zamoskvorezky bailiffs office. Either they are too lazy to work, or Transneft had already "done their workon them"

After that, we sent a complaint to the administration of bailiffs in Moscow, where our appeal was accepted and then returned to Zamoskvorezky bailiffs office.

Currently we hope that after additional checking the bailiffs will:
- charge the transneft-crooks for their refusal to fulfil the court's decision
- take the Transneft building by storm using helicopters, water cannons, dogs, and judge Borovkova (as a secret weapon) and force them to give us all the records.

We have a type of constitutional state. The rule of law. The campaign to restore transparency in state-owned companies. The world Financial center, again. (The things declared by our government, promised by Putin and Co).

And we hope that this is not a rule, but an unfortunate exception, that a shareholder is suing them for two years first, win every hearing, and then fighting really hard to get what they have already supposedly won.