Do you still remember the Daimler case?

On April 5, 2010 we organised several thousands applications to the prosecutor's office and to the President demanding an investigation into bribes to Russian officials that the Daimler company admitted during the investigation of the U.S. Department of Justice.

The "law enforcement guys" messed with our heads, and were going to close the case as per usual.

However, they got into trouble after our campaign and a huge amount of media coverage, so a criminal case was finally initiated on September 27, 2010 under the "Fraud" law.

After that, the Investigation Committee stopped providing us with any information regarding the case.
We should understand that despite all our complaints, our status was deemed "nobodies" as no specific person was robbed, but the entire country's budget.
We are not allowed to fight for the budget, so there are special advocates in official uniform, i.e. the same guys who took kickbacks from Daimler.

So a departmental inquiry was the only way to get any information. This inquiry was made by the MP Petrov, for which we are grateful.

Yesterday they sent me a copy of the reply: 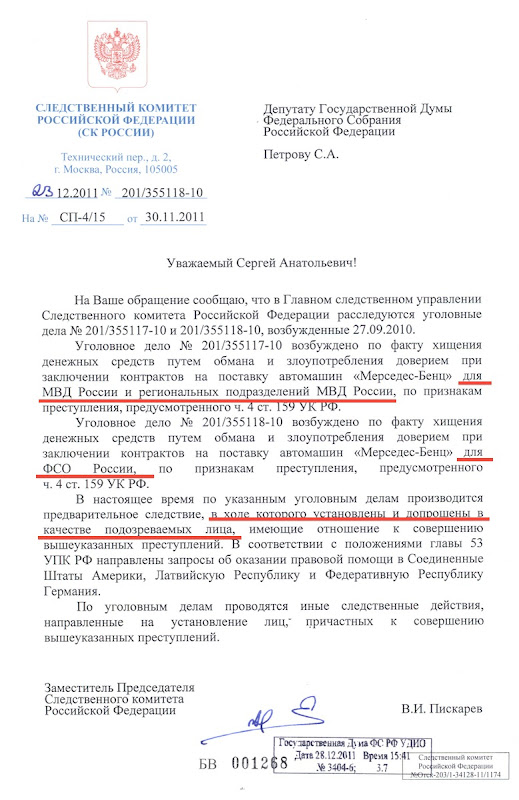 (The text in brief: the criminal cases that were initiated on the contracts concluded with the Federal Guard Service and the Ministry of Internal Affairs).

In general, of course, for cases within the control of the General Prosecutor's Office, one would expect a more robust investigation.

Two years have already elapsed, but nobody has even been charged yet.
Thank God, there are some suspects.

It is finally clear now, that there are two criminal cases opened during the investigation and we've known about them since November 2010. And nothing more.
One case is about kickbacks in the Federal Guard Service, and the second one is about kickbacks in the Ministry of Internal Affairs.
At the same time, not only the international Daimler office, but also the Russian one officially acknowledged (even in April 2010) that they paid kickbacks to:
http://i42.tinypic.com/vem35f.jpg

So, where are the investigations into the rest of crimes?
We are going to write complaints about it right now.

And we hope that the Investigation Department of the Investigative Committee pursues their job more vigorously in the New Year.
We have a feeling that the investigators think that everybody has forgotten about the case, so they are waiting for the case to expire (this is quite true for the cases in the 2001-2003 period).
We haven't forgotten. Everything is on record.

Nice translations of the conversations between